Another Set of WWI Rules and a WiP Picture

Since I first read this post on Little Wars Revisited, I have been looking for a copy of Wargames Illustrated #235.

It came up on eBay now and again, but the price was always too high for my tastes.

Then a few weeks ago, I received a $5 off coupon for any order over $10 from eBay. And I found this lot for sale and even with shipping, with the coupon it was too good to pass up. They arrived yesterday: 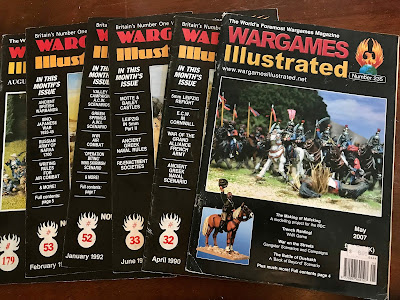 Issue 235 contains a set of rules for WWI trench raiding: 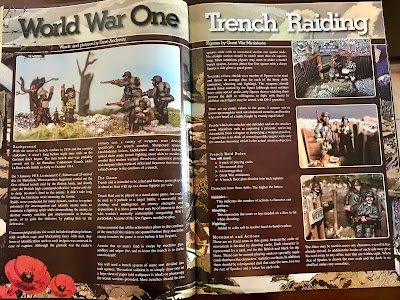 The other issues are just a bonus and all are a joy to page through.  I look forward to reading them all. Each one is full of history (I mean the ads, not just the articles).

For as long as I can remember, I've had a love of magazines. Periodicals are always my favorite part of going to the library. In grad school, for my collection development class, I did a project on scientific journal selection for academic libraries that included both a VBA script and a song on my acoustic guitar that explained the methodology (Dhawan's journal selection model).

The point being, this is like heaven arriving in the mail!

And just for fun, here's what's on the paint table: 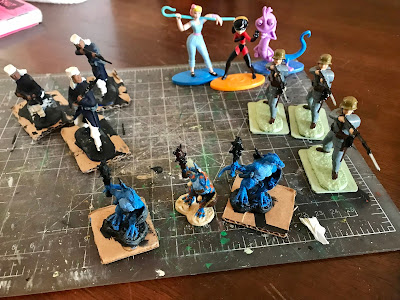 The Austro-Hungarians are basically done - they just need some touch up on their bases. The middle lizard is the one I posted previously but it's serving as my painting reference for the  others. The Foreign Legion coats are a little darker than I'd like but that's the blue I have, so that's what I'm using. The figures in the back, all Dollar Tree acquisitions, well I don't know.

I have no specific plans for them yet but I think the purple thing from Monster's Inc. could work as some kind of character figure on Venus, while the other two may end up as martial arts heroes or possibly end up in a Weird War II scenario. In any case, my collection of 54s is lacking representation of women beyond two Toy Soldiers of San Diego Soviet snipers and Lady Pennington and the price was right. Although they are a bit taller than I'd like, I think they will still work fine in whatever role they are assigned.