As PanGermania faced off with the Soviet 1st Tank Corps and 1st Soviet Guard Rifle Division (SGRD) (see Part 1),  Phantom Division found itself again embroiled with the 2nd SGRD, aided this time by the 3rd, in the region west of Yakarlevo.

The Soviets had orders to capture and hold the village (center) and settlement to its North as a way to deny the Germans this sector, while Feuerbach set his sites on capturing the two bridges that spanned the river that snaked through the region. That he should have chosen instead to capture the southern bridge and the hills flanking the road north of his position, while bypassing the northern bridge entirely, is still debated by scholars of the period. 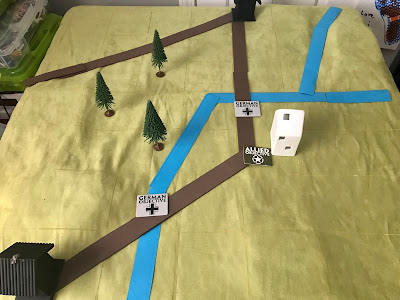 Blavatsky's 2nd Soviet Guard Rifle Division's 4th and 5th Rifle Regiments moved quickly for the village, unaware that 3rd SGRD was facing delays in their efforts to move southwards to link up with his force. His artillery situated itself atop a hill located north of his position. 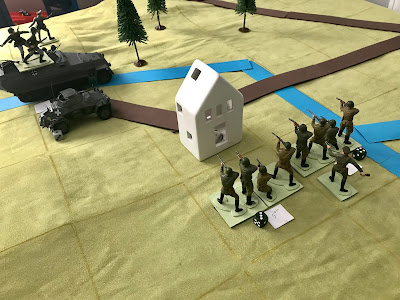 The  lead elements of the German force - 5th PanzerGrenadier and 1st Panzer Recon - secured the bridge with ease. Fate smiled on Blavatsky when 1st Panzer Recon was driven off after attempting to advance on the the 5th Rifle Regiment occupying the village - which was also serving as Blavatsky's HQ. 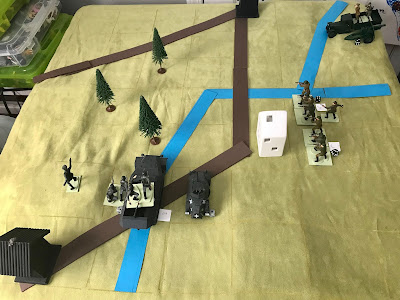 Feuerbach, seeing the difficulty capturing the village, kept his force west of the river and planned to approach the northern bridge from the west. 5th PanzerGrenadier, supported by 2nd Panzer, led the way, moving north of the woods, before turning west. They managed to get close enough to credibly threaten Blavatsk's artillery. 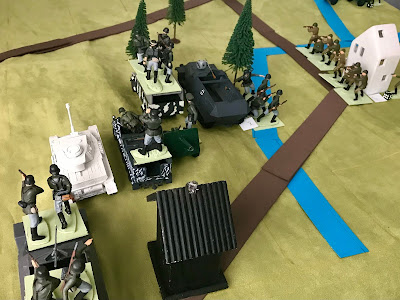 But around 11:00 AM, elements of 3rd SGRD (7th and 8th Rifle Regiment, and 3rd AT Battalion) arrived from the north on what was the flank of the western moving elements of Phantom Division. Under heavy and accurate fire from artillery, 5th PanzerGrenadier was rendered combat ineffective and. AT fire from the newly arrived forces threatened 2nd Panzer, repeatedly driving them from their protected positions in the woods.
Artillery from both sides played a significant role in the fighting that followed, with the Soviet 7th Rifle Regiment nearly destroyed under bombardment, 4th Rifle Regiment repeatedly forced to abandon its position north of the village,  and 2nd Panzer permanently forced to abandon the woods.
Although the Soviet 8th Rifle regiment would ultimately suffer substantial casualties at the hands of 4th PanzerGrenadier and the 1st Panzer Engineer battalion, it was not before Feuerbach had stretched his force beyond its limit. 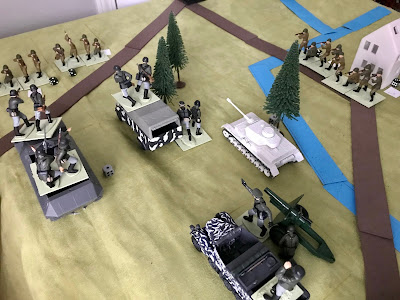 Forced to fall back to at least hold the southern bridge, the Germans continued to fight but they could make no further effort for the northern bridge. Unable to unseat the Soviets from the village without great risk even the position at the southern bridge was tenuous. 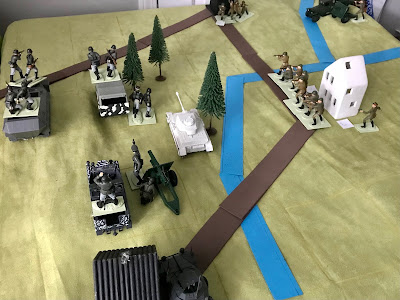 Rather than risk annilhation, Phantom Division withdrew south to link up with the German 1st Infantry Division.
******* Campaign Notes ******
Once again, or if you're just joining us, this is being fought with The Portable Wargame.
This game was probably the most fun I've had this campaign. I fully expected a blow out as underpowered Phantom Division (18 strength points) was going against 24 points of Soviet might.
When it was all over, the Germans lost 6 strength points to the Soviet's 9!
At the end of turn 8, both sides could only afford to lose two more strength points. The Soviets got the better of it though, and managed to knock out the Germans.
The downside of such an exciting game is that I got so absorbed in the game, I forgot to take pictures once things got going!
The only thing not standard in this game was a 12 entry random event table I created. Very generic with 1/3 negative events, 1/3 no effect, and 1/3 positive. Each side would roll after they turned over their card for their action points that turn.
I decided to give it the honor of rolling for each side's random events to my venerable 12-sider from my very first set of polyhedral dice acquired in 1983 or maybe early 84.
In any case, here's where we are at the end of campaign turn 3: 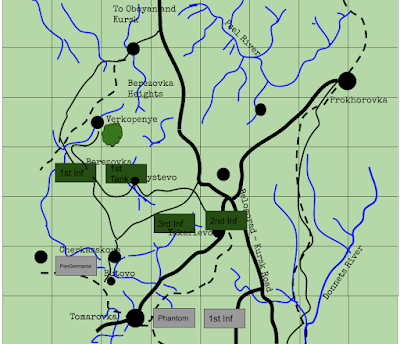 Things aren't looking good for the Germans as the Soviet wall seems to have stiffened finally.
at September 25, 2021