My Own Private DragonCon

This post is a bit overdue but I just got around to writing it up.

Although I had purchased a badge for DragonCon in those heady days of Spring, when it seemed we might be turning the corner on the COVID thing, when the time came for the event (Labor Day weekend), I was not particularly enthused about being in confined spaces with thousands of strangers. The nail in the coffin was that my son, who is 10 and too young for a vaccination, would have to get a COVID test before attending and he hates getting them done.

So, we opted to do our own mini con at home. Admittedly, we missed out on some things, but on the other hand, the lines were short.

On the days he was in school, I managed to play the two battles for the 2nd campaign turn of my Fictional Citadel campaign (documented here and here)  as well as do a lot of painting (for me at least): I finished 5 figures and one MG crew.

One of my son's favorite things is video games (we usually spend a lot of time at the arcade at DragonCon), and so we played excessive amounts of Minecraft together.

I stand by my assessment that if you like old school DnD, it's worth giving Minecraft a chance (play in survival mode). It's somewhere between a hex crawl and a dungeon crawl but you don't have to wait until 9th level to build a castle. My son plays in creative mode while I play in survival mode so he can heal me when things inevitably go awry.

Playing RPGs is one of the highlights of my Con experience, but unable to entice my son to play anything I felt ready to run (he really wants to try Delta Green but it's a bit much for him subject wise I think), I turned to my neglected stack of rule books.

I read several, including Usagi Yojimbo (the Fuzion version) and Call Catthulhu, which was an enjoyable activity even if not playing an actual game. 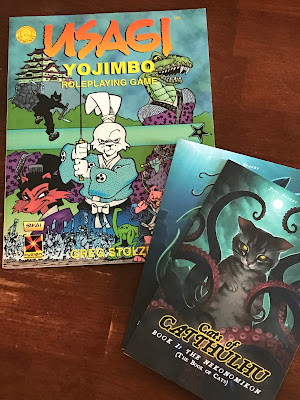 However, I then did a quick review of Metamorphosis Alpha and went on to play a solo adventure. "The Long Hard Mile" put out by Goodman Games. 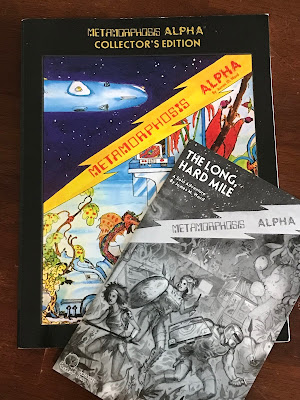 My mountain goat mutant died in an encounter with a mutated plant but it was a fun to try out the system for the first time despite having the rules for a few years now. I think Metamorphosis Alpha would work great in solo play using the Mythic Game Master Emulator because there is a lot of exploration and your character really is kind of oblivious to the workings of the starship, or that it's even a starship.

Another highlight of Con for me is the vendor hall (stuff!), and so I gave myself permission to spend a little money.

I ordered the Call of Cthulhu (CocC) starter set and got it before the weekend was over. So, I played the included solitaire adventure therein - thus making two RPGs played.Which is two more than I've played in about 5 years now. 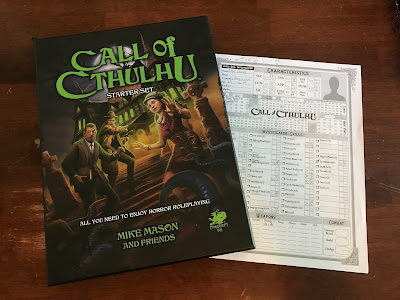 My investigator, antiquarian Elias Barnes, did not survive, but it's Call of Cthulhu so that wasn't surprising. The solo adventure is often compared to Choose Your Own Adventure but really it's more like Tunnels & Trolls solitaire modules or the Steve Jackson game books - you have a character and there are game rules that exist outside of the story and the outcome of skill checks or combat or what not can determine which paragraph you read next.

The starter set is for 7th edition CoC which is new to me but it's been out a bit now I think.

I used to have 6th edition CoC, and played in a few one shots, and then sold my rulebook because I didn't really need the book to play a character in one shots. 7th edition has some interesting? changes - like half and fifth rolls. I don't know if I'd invest in the full rules because the starter set provides enough info to create characters and run adventures as is. I suppose the price lists for 1920s goods and chase rules could be helpful, but I'm not sure they are $70usd helpful (for both the Keeper's Guide and the Investigator's book).

I also ordered a Usagi Yojimbo trade paperback (book 1)  to go with the re-reading of the RPG rules I mentioned above as it's been awhile since I've read any of the comics.

An earlier order placed with Armies in Plastic arrived over the weekend as well, so although not a Con purchase, its arrival was timed perfectly. Two packs of regulars for the French and Indian War, one pack of French Foreign Legion, and one pack of Woodland Indians for some new projects.

Nerd related movies seemed a good choice for our weekend, but in the end we decided on Phineas and Ferb's Marvel and Star Wars extended episodes, available on Disney Plus. We've seen both before but it had been awhile. The Star Wars episode is supremely funny with lot's of callbacks to the Star Wars movies.

I did try to screen Beastmaster for him but that didn't last long. I saw it in the theater when i was 10 but it's been a long time since and movies have come a long way. It looks low budget even for its time -like it was shot on VHS. My son immediately noted the hero's Luke Skywalker haircut. We got maybe 15 minutes through it before we decided an episode of Teen Titans Go! would be more enjoyable (it's easily my favorite comic book related animated show).

A couple of episodes of Ken and Robin Talk About Stuff, featuring Kenneth Hite and Robin D. Laws (it's my favorite gaming related podcast - it's RPG focused but they cover so many topics in an intelligent way with great humor. I highly recommend it) provided us with our convention "panel sessions".

Finally, we ate drive thru Taco Bell, not once but twice, ordered pizza, and went to Waffle House. Because at DragonCon you eat in the food court at the mall generally so this was my way of replicating that. Plus no dishes to wash because chores are definitely not part of Con weekend.

I am not convinced I'll invest in a DragonCon badge for next year - it's tempting as a point of hope for  being among my fellow nerds but at the same time, I don't think my fun was in any way diminished this year.